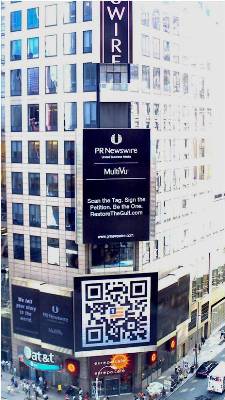 An organization called Women of the Storm needed a new and buzzworthy way to raise awareness of their cause around the oil spill in the Gulf of Mexico. Their objective was to add as many signatures as possible to a petition demanding government leaders address this critical issue.

ScanLife “QR” Codes were used to link people to a mobile formatted website where they could watch a video from celebrities supporting the cause, and enter their names in the petition. The code was shared virally on social networks, placed on billboard in Times Square, and sold on T-shirts from their website. The story was covered by mass media, and top blogs including Mashable which helped generate over 100,000 petition signatures.