Virtual Shops: From Experiment to Fruition

The latter half of 2011 was highlighted by a series of mobile-commerce experiments using QR codes. The goal was to understand the changing nature of shopping, driven by shoppers' adoption of mobile technology. These initiatives sent a shockwave through the retail industry and mobile commerce quickly made the jump from fiction to reality. Today, mobile shopping is rapidly becoming a legitimate part of an integrated, multi-channel retail strategy. In fact, the scale and frequency of these experiments is accelerating: in Q1 of 2012 we've seen as many virtual shops as in all of 2011. Tesco Homeplus for example, which piloted the first virtual shop concept in 2011, extended its virtual stores in South Korea last month. Twenty bus shelters displayed groceries that users could purchase by scanning the appropriate QR Code with the Tesco Homeplus Smartphone App. Tesco’s app is now the number one shopping app in Korea with nearly one million downloads since it was launched last April. 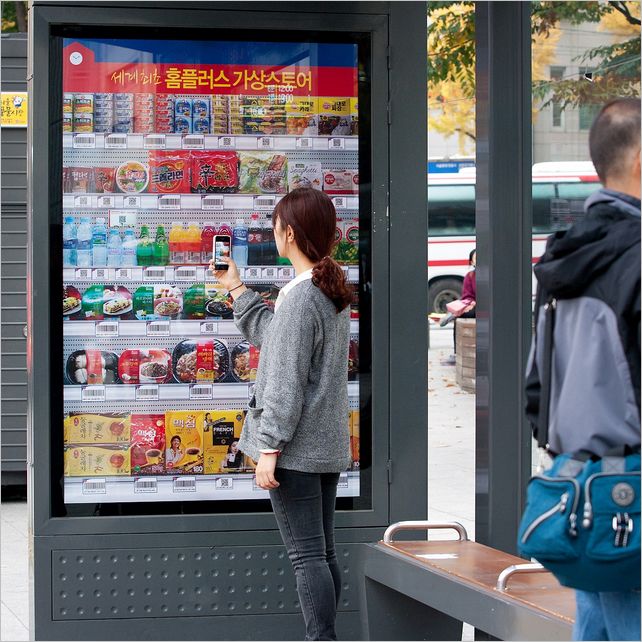 PayPal opened QR code shops in 15 Singapore subway stations, allowing commuters to buy Valentines gifts on the go. When asked about the choice of QR codes, Southeast Asia and India Managing Director Elias Ghanem noted that with QR codes "no additional infrastructure is required for merchants, retailers and consumers." Virtual stores are also beginning to pop up in western countries. For example, in the US, Resultco redesigned store window display space to draw attention to various products, as a part of its Detroit Storefront Project. Consumers are encouraged to scan the QR codes in order to gain further information or make a purchase. Also in the US, Glamour magazine joined the fray by setting up a shoppable wall across from the Standard Hotel in New York City. Consumers can scan mobile barcodes to buy cosmetics for home delivery. In the film industry, Twentieth Century Fox Home Entertainment established the Fox Movie Mall virtual store fronts for consumers to purchase a movie and have it mailed to their home. Over in Europe, Marks and Spencer in the UK, 4me in the Netherlands and Jetshop in Sweden launched their own initiatives. So where are we heading? Consumers won’t rush to swap their shopping bags for shopping apps any time soon. However, as smartphone and mobile internet penetration surges, so does the mobile commerce market. Retailers that implement mobile as part of their strategy will have an early advantage in a market that's growing faster than online commerce did the early 2000s. Today, 18% of those that have scanned a code go on to make a purchase, and recent forecasts have predicted that mobile commerce will overtake traditional e-commerce by 2015. At its current pace, it just may happen sooner…
Commerce , Examples , General , Marketing , Research , Retail
Share this article
Read previous Read next