by Alex from London

QR Code trends continue to gain momentum as smartphone owners grow across the globe, and smart marketers turn to engage marketing to reach mobile consumers.  Released last month, eMarketer’s latest statistics  showcase that on average, 19% of US respondents (1 in 5) have scanned a QR Code ahead of the 15% average in Europe. Interestingly, across both regions research continues to support print is the primary media placement for QR Code engagement.  Another indication of printing trend research (released by Nellymoser) reported that response rates are higher with QR Codes than direct mail. 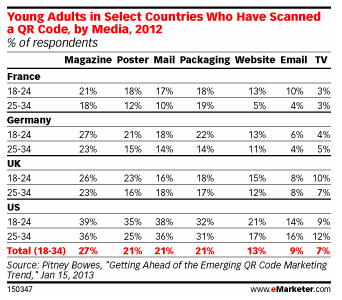 Putting the numbers into perspective Comparing these QR code statistics with other marketing innovations that have come out of the recent years allows us to appreciate the implications of these studies: the table below shows the consumer adoption of Twitter in the US, as measured by eMarketer. In 2012, this amounted to 11.5% of the adult population and 14.4% of internet users. 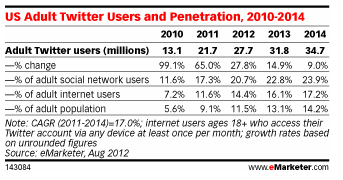 But wait, it gets better. In 2012 research by Accenture on the effectiveness of consumer engagement triggers concluded that among 1,000 television viewers, 28% had interacted with a QR Code, vs. 18% with a Twitter hashtag. Similarly, during the 2012 London Olympics, we found that the proportion of individuals interacting with QR Codes was 36% higher than with Foursquare. Last but not least, our own research shows that the average engagement post scan to click was 62%.   Some studies show a growing investment in “mobile recognition” technology, of which QR codes are a large part. The amount invested in mobile recognition was expected to double to $164 million during 2013 and continue to grow to $364 million by 2015, according to a recent study by the Mobile Marketing Association. With the increased capacity for mobile recognition likely will come an increased use of QR codes.   The use of code scanning has gone up during the past year, according to at least one assessment of quarterly QR code statistics 2013. A check of QR code stats done by ScanLife shows the firm processed 18 million QR code scans during the first quarter of 2013. The amount was some 5 million more than during the first quarter of 2012, and the first quarter of 2012 had posted a 157 percent gain when compared to the same three-month period during 2011.   Like social media in the early days, marketers who learn to harness the power of mobile engagement will have a significant head start in the market place -whether it’s QR Codes today, or combined with NFC or augmented reality tomorrow.   For expert advice on how to integrate mobile engagement tactics to your marketing campaigns, contact us or visit www.scanlife.com

You may also…
Research , Trends
Share this article
Read previous Read next