It finally happened. The tipping point for Internet usage shifted from desktop to mobile in 2014 for the first time in US history. More than half of Internet traffic for giants like Facebook, Google, ESPN and many more came from mobile devices. This trend is bound to continue with the adaptation and accessibility of mobile devices. With the average consumer’s attention shifting from desktop to mobile, advertisers have to recalibrate their marketing strategies to not just include a mobile piece, but to have smartphones and tablets lead the conversation. 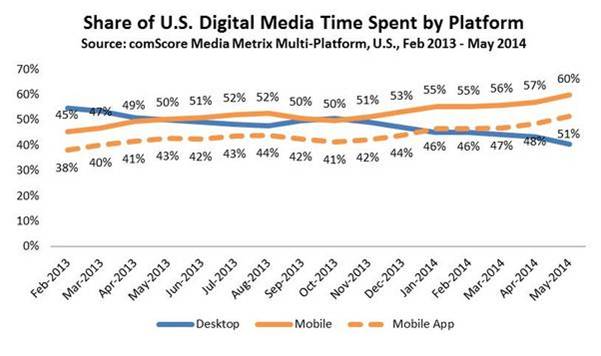 In an attempt to emulate the success of banner advertising from desktop computers, advertisers started applying the same strategy on mobile devices with relatively little success. The small and personal screen real estate on any given smartphone is not ideal for banner placements. According to research conducted by Monetate, smartphone add-to-cart and conversion rates are much lower than their desktop counterparts, with 4.70% and 8.52%, respectively. According to comScore, 89% of our time was spent using apps rather than browsing, and with 83% of consumers in the US using mobile devices within a retail store, it’s no surprise that a robust shopping companion app like ScanLife can provide real value for both advertisers and consumers. And we all know how reluctant consumers are when it comes to talking to a retail store associate; according to Deloitte Digital’s research, 80% of visitors would rather use their own personal device or a kiosk. ScanLife is more than just a shopping comparison app. It lets brands and consumers interact with each other on the consumer’s terms. Besides showing exactly what they are intending to purchase, users explicitly choose how often and from what interest category they want to receive messages. The numbers also confirm the effectiveness of letting the consumer decide, with engagement rates averaging 8%. We have to stop treating mobile as a smaller computer screen and accept that it’s a distinct medium that’s still trying to find its place in the advertising spectrum. The sooner advertisers move away from treating mobile as an add-on to their existing digital media plans, the sooner they can start engaging their audiences and answering their needs. Each mobile interaction is a new opportunity for a brand to enhance the customer experience.
Educational , Marketing , Retail , Trends
Share this article
Read previous Read next