QR Codes: The Future’s So Bright, We Gotta Wear Shades

“Reports of my death have been greatly exaggerated…” – Mark Twain Reports on the death of technological advancements and their adoption are plentiful throughout history.  Automobiles, computers, smartphones, even the Internet have all been written off by respected and informed observers at one time or another. (For some of the more well-known technology prognostications that missed the mark, visit this Wikipedia page dedicated to them.) In the past year or so, a few in the media seem to have accepted a meme that QR Codes are “dead.”  Several articles have appeared with that notion in the headline.  What’s somewhat humorous to us is that just two years before many in the media were touting their indispensable value in a mobile world. When you’re a technology company, you have to expect the rise and fall and rise again of expectations.  The fact of the matter is, consumers every day, everywhere throughout the world are using QR Codes and other mobile triggers such as Microsoft Tag and NFC in numbers never seen previously.  How do we know this?  Scanbuy is the largest provider of mobile engagement campaigns in the world, and we have the data to back it up. So what happened to dampen the enthusiasm, at least with some in the techno-punditry community, for QR Codes? Bad implementation, pure and simple.  Too many people, including those who write for media outlets, had terrible experiences when scanning QR Codes, such as being sent to websites not modified for mobile devices, content not providing the information promised, or dead end URLs.  Also, many marketers didn't quite understand that a QR Code needs to be placed within easy reach of consumers with mobile phones, so QR Codes high on billboards or on a subway wall across the tracks received ridicule, deservedly so. But the fact of the matter is that people – whether shopping, traveling or using products -- often want immediate information.  One of the best ways to provide that real-time information is through a mobile engagement platform such as ScanLife that allows them to scan a QR Code or other mobile trigger. Top brands such as Starbucks, Staples, Coca-Cola, Nike and Disney continue to use QR Codes in their mobile marketing campaigns. In case you need more convincing, here’s some recent examples starring the erstwhile QR Code.  And as you’ll see, we think we’re moving past just sending consumers to a generic website: 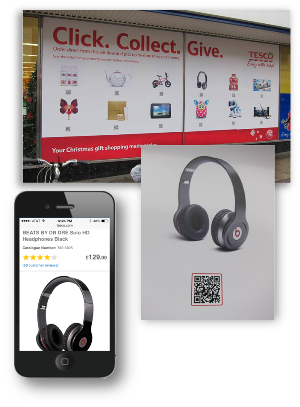 As you can see the QR Code is alive and well. Stop the presses and pull the ‘QR Code is Dead’ obituary because top, global brands are leveraging the QR Code to grow consumer engagement and bridge the gap between the digital and physical world in still ever-growing numbers.
Case Studies , Educational , Examples , Features , Marketing
Share this article
Read previous Read next