Apple Pay and What it Means to Omnichannel Marketing

A company like Apple jumping into the mobile payments space is a great development for the entire mobile ecosystem.  While it does not mean that mobile is the new wallet overnight, there are some really amazing implications as it relates to commerce and specifically omnichannel strategies. First, a quick primer on the facts: Apple Pay allows anyone with an iTunes account (800M globally) to pay for goods or services, with in-app only purchases like game levels handled like they are today.  It will be available only in the new iPhone 6 and 6 Plus (and the Apple Watch when available).  They say it will be available in October 2014, starting with the US only with other markets to follow. There are a two main things that need to happen to make this new payment option work. 1)  People need to buy the new iPhones.  Upgrade conversion has been averaging about 9-10%, but some industry experts believe it will increase with this launch to about 12-13%.  With 260-300M active units, that equates to 30M, plus another 30-40M new users in the first 12 months.  Certainly big numbers and with iOS users 4x more likely to spend than Android, it can't be ignored. 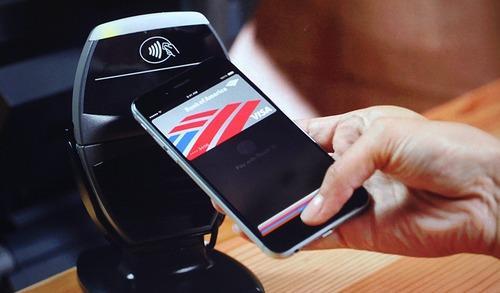 2)  Retailers of all kinds need to support Apple Pay just like they would need to decide if they want to take Amex and MasterCard.  For online retailers, this is a little more straight forward since they just need to add the payment option to their existing checkout and gateway systems, and now iOS apps can add Apple Pay using available APIs (more on that below).  For brick and mortars, the commitment is a little more significant.  Apple Pay uses NFC technology to send the secure billing information to a contactless POS terminal with NFC receiving (see above image).   It is estimated that only 2-3% of retailers have this technology activated today, and Apple themselves said that 220,000 stores will be compatible at launch out of 9M that reported an ability to take credit cards.  The good news for the US market is that many retailers plan to update their terminals for EMV (Europay, MasterCard and Visa) support starting next year, and NFC can be part of that migration. So, let's assume that this all works out.  People buy the new iPhones in droves and retailers migrate their systems over the next couple years.  What does that all mean for omnichannel marketing and engagement? Omnichannel by nature is about creating seamless experiences across environments, and much of that is around taking people from the mobile device to physical and vice versa.   Apple is making their NFC technology open to any iOS developer, but only for payments for now.  The NFC technology they are using could allow people to tap NFC and get taken to an offer or website, but for now they are not making that available.  This is a pretty typical Apple strategy as they want to drive adoption of a new behavior for a specific reason.  They don't want to confuse consumers with a  tap here to watch a video and a tap there to buy a video.  Therefore QR Codes, whether you love them or hate them, are still the most ubiquitous and least expensive mobile trigger around the globe. So in the end, Apple Pay should be strongly considered as another tool in the box.  Let's play out one scenario. So the bad?  This will take some time to mature, and even when it does, it will reach only a portion of the mobile user base (granted the most valuable one).  The good?  Closing the loop from one channel to another it extremely valuable for anyone playing in the mobile space, and Apple is helping us get there.
Mobile Payments , Trends
Share this article
Read previous Read next